TORQUE MEASUREMENT WITHOUT A MECHANICAL TORQUEMETER

3 French SMEs, including OPTEL-TEXYS, have implemented an innovative optical solution to meet the needs of one of them. CSTM, which develops a high-speed electric motor and needs to measure torque. The company is facing several difficult issues that conventional torquemeters cannot overcome: the measurement must be carried out without added inertia, without integration constraints and at very high speeds.

François Dugué, director of CSTM, explains his requirements in detail.
MC: What is the context of your innovation and what are your needs?
FD: We are strongly concerned with high-speed rotating machines, particularly for the aeronautics and space industries, whether for test benches or for prototypes of on-board equipment. In this context, we are developing a test bench for an electric motor with a mechanical power of 52 kW at 100,000 rpm that does not exist on the market. For its development, we had to measure the speed and the torque. But there is no commercially available torquemeter above 25,000 rpm.
MC: So, what solutions were found for these measurements?
FD: To measure at these high speeds, we need a very fast and accurate reference speed sensor. For this, we chose the OPTEL-TEXYS Model 152M (Picture 1), which has many scientific and practical advantages because it has TTL and Analog outputs. This standard product has a dynamic range that is really adapted to high speeds, as well as being easy to install and use. The first requirement is to have a marking on the shaft for each sensor by alternating a reflective surface and a matte surface, as well as an optical probe holder. The installation and adjustment of the optical sensor is then about 10 minutes. The advantages of these optical probes are their detection resolution, which makes it possible to put many marks on a small diameter, and their insensitivity to electromagnetic pollution. It is no wonder that Porsche, Toyota and all other majors use OPTEL-TEXYS products worldwide. 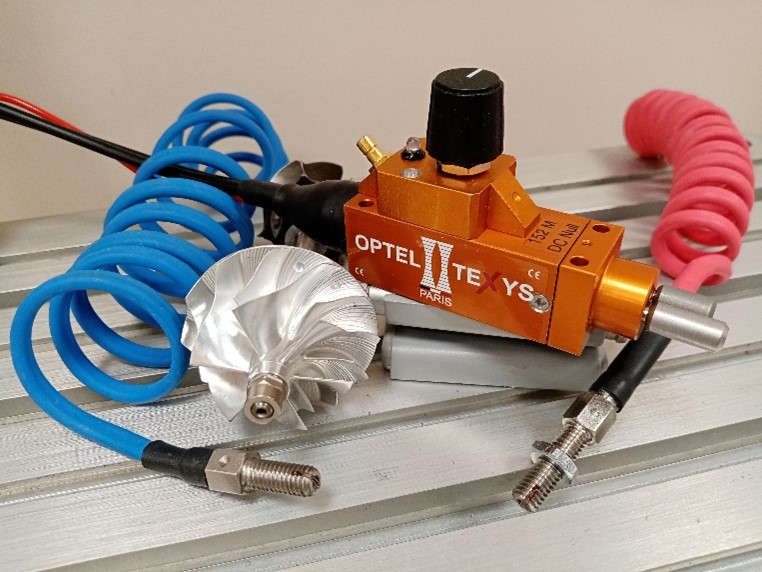 MC: And then, how do you process the measurements?
FD: The approach was the same for the expert system. We used the VIB 360 application from IMPEDANCE and the acyclism extraction algorithm developed by Dr Hamid SAIAH. This software allows, in conditions of very high speeds in stabilized/transient mode, the calculation of the average and dynamic torque, from two targets placed on the rotating element. This method can be used to extract the torque image in a non-intrusive way, especially in situations where the installation of a market torquemeter is impossible. With this acyclism and torsion/phase calculation tool, we obtain the eigenmodes of the shaft line with only two 152M sensors and two OPTEL-TEXYS probes, each located on a phonic wheel, in front of contrasting markings positioned on each side of a shaft portion of known stiffness.
The results are convincing, as shown by the validation tests with a commercial torquemeter that we carried out at Supélec, where an accuracy better than 10-3 angular degrees was found, i.e. 0.02% of the torque considered at low speed.
MC: What was the added value of this torquemeter?
FD: The strength of this torquemeter, based on OPTEL-TEXYS sensors, is that it can be used to measure large rotors at low speeds and theoretically at speeds above 200,000 rpm with the same angular accuracy, if the acquisition frequency is adapted.
Our recent tests up to 85,000 rpm led to exceptional results, with two 152M sensors on the electric motor test bench designed and built by CSTM (Picture 2). Indeed, the torque measurements perfectly follow the calculation predictions. Two optical probes are located at marks on the couplings on either side of a flexible shaft, itself located between the aerodynamic brake on the left and the motor on the right. 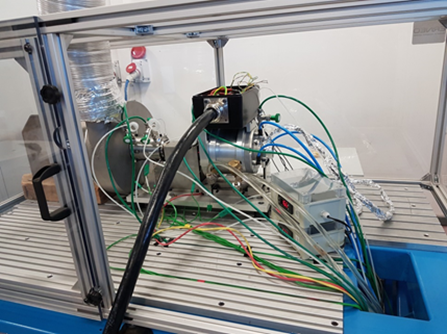 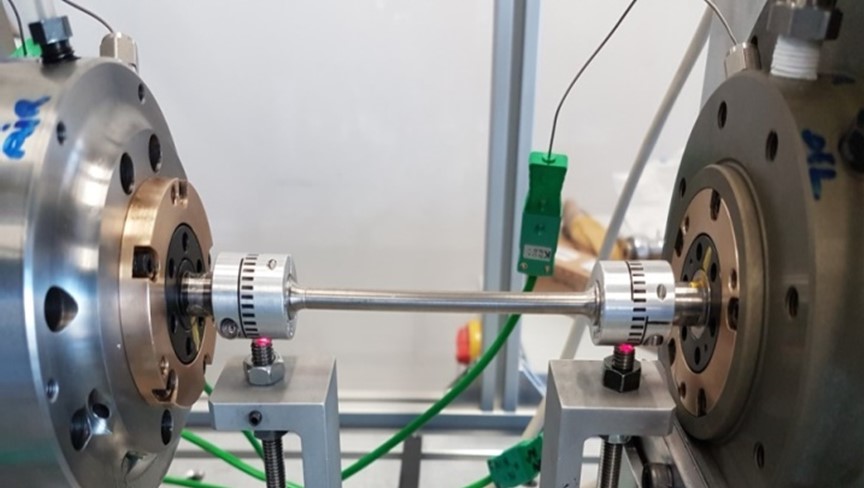 By comparing the measured torque with the braking torque of the aerodynamic brake that we calculated in numerical fluid mechanics (Picture 3), we validate at high speed both the calculations and the torquemeter, which proves to be the more accurate of the two, as shown by the small dispersion of the measurement points in relation to their trend curve. 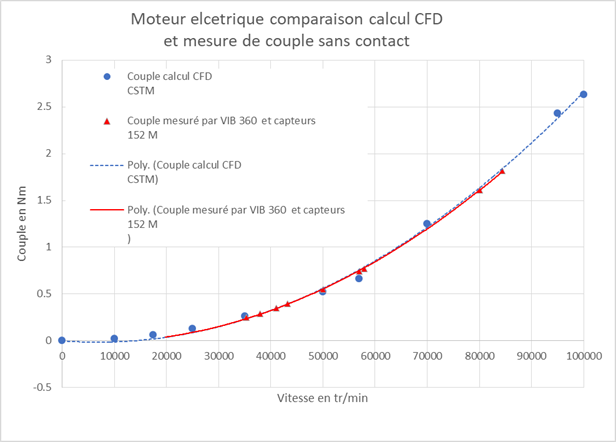 This is likely to be a real first, offering opportunities for high-speed, inertial-free torque measurement and associated analyses such as energy dissipation and understanding of cyclo stationary phenomena.
Depending on your specifications and the specifics of your application, OPTEL-TEXYS will be able to guide you towards the optimal solution by combining the most appropriate sensors, acquisition system and algorithm.